On this day, whether you consider yourself a mom or not, I invite you to ponder 2 things: Your origins and what you’ve birthed into the World.

So, I don’t tell this story very often, but I became a mom and an intuitive at the same time. It took about a week and I’m told that it looked really hard from the outside, but I didn’t experience it that way, despite the fact that I brushed up against death, twice.

By now, I’m guessing you know that I pulled through. And to allay any fears on the part of you, my deliciously-sensitive tribe, here’s proof that the little one I was cooking did as well. This is Anne-Charlotte last month in France, at Chenonceau: 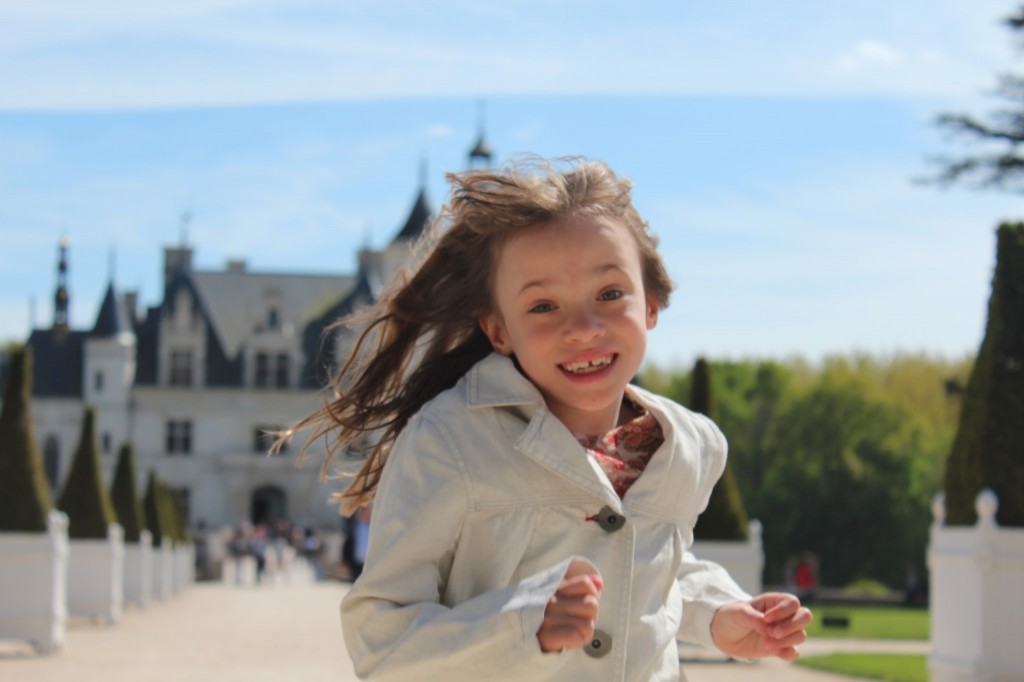 Here’s how it went down:

I was 6 months pregnant, and just starting to gather the baby gear. It was just after the new year, and I had the flu—bad. I was home sick, listening to the radio commenting on Ariel Sharon’s stroke that day, when my sweetie has just come home early, cause he was still getting over his version. He asked (in French), “How are you and Anne-Charlotte?” I was tying my hair back, because I could feel a bout of vomiting coming on.

Let me tell you, that scene in the Poltergeist had nothing on me. And after I was done with the spasm that that level of throwing up requires, instead of my body relaxing, it just got worse. All of the blood vessels in my brain started expanding, fast. Within seconds, my brain was w-a-a-a-a-a-y too big for my head. I suddenly understood those windows cut into early human skulls!

Pushing down the panic, I called to my husband. “Call Doctor, Head Pain 10!” was all I could manage to get out. Forget about French, I could barely speak English.

On the short drive to the hospital, he told me my life insurance policy had been approved that day. “Good—I think I may die.” He thought I was being a drama queen, but 2 minutes later when he got up to Labor + Delivery where a team was trying to keep me alive, he was stopped at the door and told to forget about the baby; the baby was gone, and there was just a 1 in 10 chance that I would survive the night.

On my end, I was doing my best to hold it together. They were trying to get a line in, and one of the nurses asked how I managed to walk in there on my own two feet—that by rights I should’ve been catatonic or passed out! “I’m very determined,” I muttered through gritted teeth.

After another round of projectile vomiting and still no luck getting morphine and fluids in, I started watching myself from the ceiling. My body seemed very far away. I hear a voice tell me that if I wanted to, all the pain could stop. It would be very easy, nothing brusque.

I saw my feet on a narrow platform, chugging forward inch by inch: that was my life. It would be so easy to take a small step off to the left, and let go of the pain. I was assured that no matter what I chose, Anne-Charlotte would be okay.

And in that powerful moment of stillness in the center of all that activity—medical personnel rushing in from all over the hospital to try to keep me alive—I knew, and I mean KNEW—that it was true. She would be fine; better than fine. I knew that she would survive and thrive, with or without me.

In that moment, instead of a baby, a powerful intuitive was born.

Since that moment in the hospital, I have never once gone back to thinking that the Universe sends me in the wrong direction, despite my 7-year cynic’s boot camp: the Ph.D.

So, in that moment of stillness—the eye of the storm—I made my decision. “I think I’ll stay.” I really just wanted to see her face. [My revision, years later: To see her face and to thank her for cracking me open, for being the direct line to my transformation, leading me from who I was (a wobbly version of me) to who I am today.]

And to no surprise, that was exactly when they finally got the line in, and I could start to come back to the land of the living.

Today, Mother’s Day, I’m celebrating having birthed myself as an intuitive that January 5th. Next week I’ll share the second half of the story—the other near-death experience +Anne-Charlotte’s birth, and a powerful dream that still directs my life today in ways I’m still only discovering, over 8 years later.

In the comments, please share what you’re birthing into the world right now. Writing it down, and having others witness it, is a super-powerful way to bring it into juicy ripeness faster, you know! I double-dare ya!