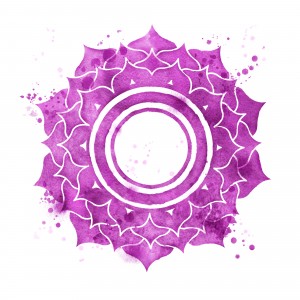 The Crown Chakra: Violet or Clear: “I Know”

The Seventh or Crown Chakra is located at the top of the head, where the fontenelles of newborns are still soft. This is the seat of our connection with the Divine. Our notions of Spirituality and Divine Connection are located here.

In some traditions, this chakra is not considered part of the human body but strictly belonging to the spiritual/ethereal realm. It is also the only chakra that shares organs with another: the Crown Chakra (and, incidentally, the color Violet) is considered to govern the right eye, the cerebral cortex, upper brain function, and the central nervous system.

As a reminder, the sixth chakra governs the left eye, the lower brain, and the nervous system. The gland in which the energy of the Crown Chakra is best expressed is the Pineal, located deep within the brain.

This gland is known to produce melatonin in response to Light, which is a hormone that regulates sleeping and wakefulness. However, its location has caused many thinkers, including Descartes, to consider it the seat of the soul: where body and mind meet to open to the Universe. This gland is sometimes referred to as the third eye gland, and is metaphysically associated with the increased psychic vision of the process of Enlightenment.

Someone with an underactive seventh chakra will be quite rigid in his or her thinking, and not aware of his or her connection to the Universe. Using Violet or clear stones can help such a person to open his or her Crown.

An overactive Crown Chakra can be seen in people who intellectualize too much, or who are addicted to spiritual issues; these people tend to be ungrounded and ignore the needs of their bodies. These people would benefit from more Yellow and yellow stones in their environment.

The ideal aspect–a balanced Crown–is exemplified by wisdom, openness, a sense of oneness with All that is, lack of prejudice, and awareness of the self and the rest of the world in a balanced way.

In the field of Sound Therapy, the seventh chakra is energized by the note “B.” 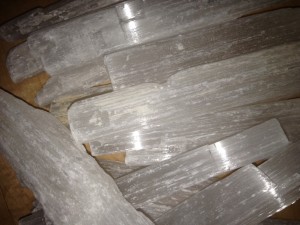 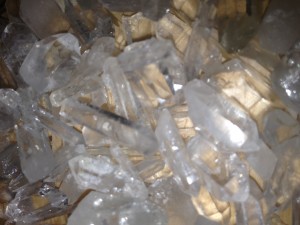 Fluorite, Selenite, Chevron Amethyst, and Clear Quartz are all treated in CrystalCRUSH, my most popular program. It’s fun to really get close to our crystal guides, but connecting with our Crystal guides opens a HUGE portal to spiritual expansion. Danburite and Apophylite are featured in CrystalLOVE, level 2 of 3 of my crystal certification series.

In the field of Sound Therapy, the seventh chakra is energized by the note “B.”