Oh, boy! What a week. It’s all good, just very activating for me. My birthday (natal Sun) is just opposite the Lion’s Gate on the Imbolc point, so cross-quarter holy days are not only super special and very potent gateways, they are also MY gateways in a very real sense. I find it hilarious that the things I want to highlight and talk about most are the most difficult times for me to reach out, because I’m being … shall we say… MASSAGED by the energies.

On the 8/8 Lion’s Gate itself (it lasts nearly 3 weeks but peaks on 8/8) I was on the phone with a friend of mine whose birthday is the Lion’s Gate, and I told her that I felt like I just wanted to go up to people, grab them by the lapels, and say “LION’S GATE!! LIIIION’S GAAAAATE!” while shaking them to indicate just how important and intense this portal time is. We both laughed and laughed. 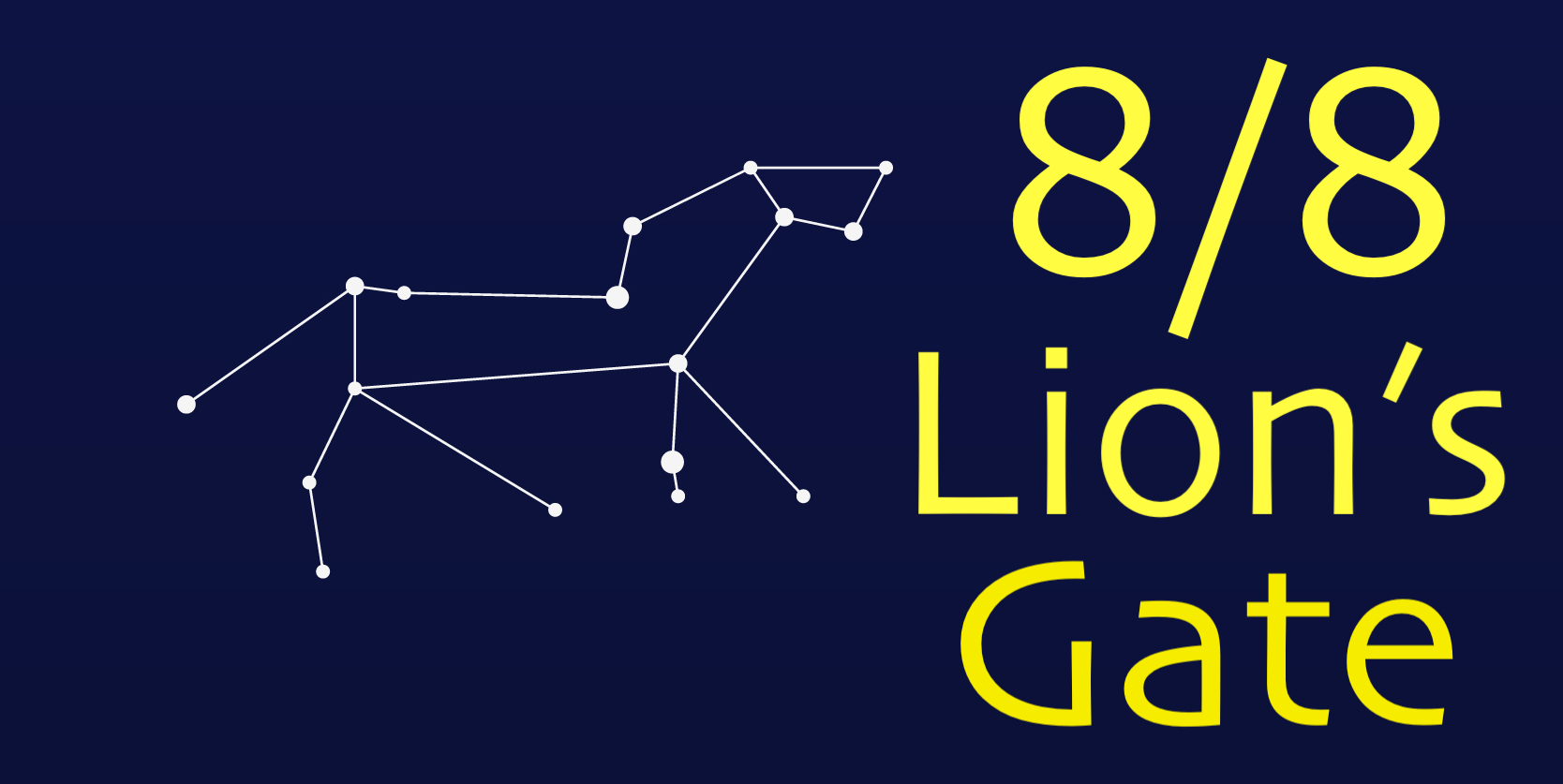 Of course, the Lion’s Gate opens each year on 26 July. Ancient star-gazing cultures as geographically diverse as the Egyptians and the Maya of Central America held this portal as sacred. It’s the Mayan New Galactic Year, and it honors the time when the planetary alignment allows for the blue light of Sirius (the “dog star”–origin of the expression “dog days of summer”) to shine down upon the Earth.

Sirius is much more than XM radio or Harry Potter’s godfather. Those who have spent previous incarnations on Sirius know that it’s a star whose energy is both subtle and potent. I like to think of it as a kind of spiritual dog-whistle energy. Sirians are highly attuned to frequency and have very active third eye chakras. You might have a Sirian background if you are neuro-divergent, channel light beings, and/or are very attracted to the color blue.

Each year when our planet is bathed in blue Sirian light, everyone’s capacity for receiving “downloads” (I hate that expression, but it’s the one we have, so I’ll continue to use it until a better one comes along) and connecting with guides via intuition increases.

This expanded capacity and bandwidth in the third eye chakra is moving all of humanity and the planet itself into and through the paradigm shift, out of the Patriarchal (fear- and control-based) era and into an ancient future where all the different faces of LOVE are the foundation and the structure.

These faces include, but are not limited to: self-love, grace, gratitude, personal sovereignty/self-authority, empathy. joy, freedom. all manner of connection and heart-based communication, compassion, understanding, unity. expansion, peace, forgiveness, abundance, generosity, justice for all (including plants, animals, and the environment), and the tearing-down of arbitrary separations between different kinds of love, be they romantic or platonic. (I hesitate even to include these labels, but I do so for illustrative purposes.)

You can recognize it by its openness.

If things feel really tight–and boy, am I experiencing this right now, along with many others, given what people are coming to me with–think of it as the tightening of the bow string before the arrow is released. The tighter it gets, the more the arrow itself will fly far and true.

I’m not sure how long this tightening will last (it could be years–sigh) but the energy of it will eventually be released. It’s important to stay present, keep breathing, help those around you who need your unique gifts, and TRUST.

Leo-Aquarius is the LOVE axis

The Aquarius Super Full Moon on 11 August 2022 at 9:36 pm Eastern (the Moon and Sun are at 19 degrees of Aquarius and Leo) is an intense one for sure.

Last month on the 13th we had a Super Capricorn Full Moon, with the Moon conjunct Pluto, god/goddess of the Underworld, ruling death-and-rebirth, and all things hidden or occult. Plus it was a super-Moon (when our luminary is extra-close to the Earth so feels and looks extra big and potent). The Cancer-Capricorn axis is the axis of fear/security/authority.

This month is the third and final super-Moon of 2022, which makes it the most intense of all. Adding to that intensity is that this month the Full Moon is sitting right next to Saturn (traditional ruler of this sign) in Aquarius. This planet was known as the “great malefic” (bringer of bad sh*t) in classical times. I’m not sure Saturn is deserving of that label, because while this planet does bring challenge in the form of limitation, timing issues, pressure, etc., it also rules the crown chakra (self-authority), structure, and can bring great rewards.

My astrology teacher Emily Trinkaus always evoked “Saturn Claus” (not a typo) because if you did your due diligence and put in the work, your stocking would be filled. Conversely, if you didn’t, you’d get a lump of coal. This tells us almost everything we need to know about the Lord of Karma.

But that’s definitely not all there is to know about this intense Full Moon. In addition to the conjunction of Moon and Saturn, there are other planets in play that create a Grand Cross–the most redoubtable of all the aspects in astrology–in fixed signs (more tightness–yay!).

The Sun and Moon are always facing off at a Full Moon, but this time, Saturn has been squaring Uranus for over a year. Uranus is sitting right next to the North Node (the lunar nodes are points in space that relate to eclipses) and the position of the North Node in the sky points to our highest evolutionary pathway as a human collective. As right now this Node is in Taurus, it indicates that Nature and the ways of Venus (art, beauty, sensuality/embodiment, appreciation of natural resources, leaning into abundance, knowing our worth) are the best ways forward at this time.

Uranus itself–the modern ruler of Aquarius–is a cosmic wild card. When it shows up, things tend to shatter. Now, this is often for the better; I consider shattering arbitrary limitations like glass ceilings to be a Very Good Thing.

Uranus rules electricity, technology, breaks, breakups, breakdowns, breakthroughs, lightning bolts, strokes of genius, and sudden, unexpected shifts of all kinds, up to and including revolutions.

Also sitting next to Uranus is Mars, throwing more gas on the fire.

Yes, it’s going to be a bumpy ride, so let’s all fasten our seatbelts. Things WILL move, and with everything I’ve just outlined, it will likely not be a minor adjustment but more along the lines of an earthquake.

How best to get through these next 2 weeks? Use the North Node in Venus-ruled Taurus as inspiration.

Hug a tree; walk barefooted on the grass or the beach, dance in the rain, stop to smell the roses, let an extravagant piece of dark chocolate melt slowly on your tongue, share your special gifts, give yourself or others great orgasms, hold your favorite yoga pose for a luxuriantly long time, breathe your favorite essential oils in deeply and feel them catalyze shifts in your system, eat nourishing foods, eat edible flowers or edible gold; cling to beauty as a trusty guide-wire, plant a tree, make an Earth altar, offer yourself and all those around you lots and lots of grace, play with your crystals.

Because of all the daunting pressure and shifts involved in this Grand Cross Super Full Moon, I’m sharing some recordings I did on Courage for a possible podcast whose purpose is to bring delight to me, and delight and cosmic truths out into the world.

These are raw recordings without remixed sound or intro/outro but those are on the way. I’m pleased to be releasing the very first ones at this potent Lion’s Gate, Aquarius Full Moon (conjunct my Sun, btw). As I go forward, I hope to have better sound quality, but please do let me know if you have comments, questions, or a topic you’d like me to share, especially if you’re willing to be the question-asker (anonymously is fine).

Thanks for listening. I hope you find them as delightful to listen to as I did recording them.

The first file is the channeled message about Courage, and the second file is a message (and support) from the crystalline realm about courage.

According to the keepers, Courage is about the opening up and broadcasting of Heart Energy, though does not need to be outwardly directed. It’s about finding the strength within yourself to do the things you don’t want to do. It’s about overcoming your resistance to being judged. In a word, to trust your heart.

Practical tips for tuning in to Courage start 2/3 of the way into the first file.

Humans are moving into the absolute unknown of paradigm shift, so we all require courage to face this, even if everything else is moving along well.

In the second file, discover the 5 stones that came to help us all to better understand and embody the principle of Courage. At the front end, I also take the time to unpack how to think about crystalline energies as both potent messages and healing gifts.

After listening (every time) to the Akashic Records file, please take the time to do a little grounding. Place your bare feel on the earth, hug a tree, stomp your feet, run your hands along your arms, legs and head to get a sense of the edges of your body, drink water, OR eat grounding foods like mineral-rich apples or proteins. This short message only requires one or two, but if you listen to longer ones, you might choose to combine several before driving a car.

I trust that you’ve enjoyed this–it’s all about delight after all–and that you’ll spread the word (and this blog or the link to the recordings page) to your friends if you feel called.

As you know, I’m not just a channel, but help people with their projects and businesses in a hidden “power behind the throne” kind of way so if you’d like short-term help with a big decision or more long-term mentorship support and you feel a rapport, let’s talk about that. I’ve been in my own healing cocoon since the last Lion’s Gate, so I’m pleased to have you join my re-emergence party! It has always been my pleasure to serve you in this way.

P.S.: You know how at the top of this blog I called right now a portal of transformation? I had been working with this idea for a week, but then decided it would be fun to get some extra clarity about this post, so I pulled a card for that purpose from my Power Animals Oracle deck.

You want to guess what I got?

Yes: “Butterfly. Transformation. Get ready for a BIG BREAKTHROUGH”

My guides are hilarious sometimes. (“Stop fiddling around and do the work you came here to do. You already know everything you need to know. Okay?”) Snort.

All recordings are (c) Elizabeth Locey 2022, with all rights reserved. This material “belongs” to the planetary and cosmic collective, but it’s uncool (not to mention bad Karma) to share transcripts and/or recordings, in part or in whole, without requesting permission in writing from and giving full credit to the channel, Elizabeth Locey. Thank you.