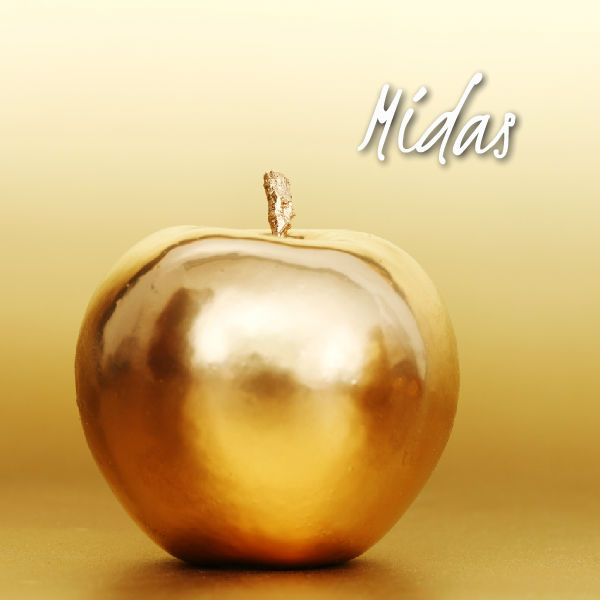 Untying the Myth of King Midas:

Release the Fear of Your OWN Golden Touch

In a recent channeling about alchemy and elementals, the Keepers made a point of talking about the cautionary tale of King Midas, and warned us not to take it at face value.

According to legend, Midas was a sage diplomat and great king, and he was owed a big favor by the god Dionysus. When asked what he desired most, King Midas, thinking to ensure the power, peace, and permanence of his realm by keeping the royal coffers full to bursting (no one would dare declare war on such a wealthy kingdom), asked to have everything he touched turn to gold. And so it was.

King Midas was at first enchanted with this new power, for gold is beautiful to behold and when everyday objects like a twig were transformed into gold, the combination of the natural beauty of the form and the brilliance of the gold rendered them stunning. The king ordered a banquet to celebrate.

It was at the feast that he discovered the shadow side of his new gift: when he tried to raise the cup of wine to his lips, the liquid turned to solid gold. The rich fruits on his plate likewise lost all nutritional value (not to mention suppleness) when they were turned to gold by his touch. In one version of the story, he accidentally turned his beloved daughter into a golden statue.

In this story, Midas’s new “gift,” then, becomes a source of despair almost immediately. In one less forgiving version of the story, Midas soon dies of starvation and a broken heart. In a happier-ever-after variant, he begs the mercy of Dionysus, who grants Midas the wish to return to his former non-gold-making state by washing his hands in a river of his kingdom, which from that day forward contained lots of gold nuggets.

All myths, legends, and fairy tales are made to entertain, but mostly to instruct.

And when I say instruct, I really mean to instill fear. The original French version of “Little Red Riding Hood” has a very telling couplet at the end which states that not all wolves are really wolves, but men who want to despoil silly little girls who are foolish enough to let them get close. There was no wood-cutter to free her and her grandmother from the wolf’s belly: that was added to placate American audiences. The girl’s insouciance (the teller of the tale would say foolishness) cost her—and her family—everything.

In the case of the King Midas tale, the message wasn’t “don’t talk to strange men,” but “don’t desire massive riches; don’t use your god-given gifts, or you’ll regret it.”

In that channeling on Alchemy, the Record Keepers made it VERY CLEAR that the Midas story has been used for thousands of years to keep people in a state of fear around using their own gifts to create massive wealth. Heck, even a KING with quite a pedigree (son of the Goddess Cybele and her consort, King Gordias—he of the Gordian Knot) wasn’t allowed to have all the riches he desired.

Basically, the tale of King Midas warns us to keep our desires on a leash. To keep our GIFTS hidden away from the world. To lock down our ability to create great and fulfilling abundance from our innate talents.

Have you been doing that, my darling?

Well, the message from the Divine Plane is that the time has now come to STOP hiding your brilliant, golden gifts.

From this original channeling on Alchemy came the call to do a special open-to-the-public Live Oracle Clearing and Transmission on MONEY + the Sacred Economy.

If you are alchemically drawn to register for the experience before it takes place, you will be able to ask your own questions about the sacred nature of money, the divine plan, how money (and the notion of property in general) has been shaped by the Patriarchy to the point where we don’t see the marionette strings any longer. And of course, these are just examples of what you could ask, because anything that is related to money and the new sacred economy is fair game.

Come to learn how best to think about, attract, handle, keep, and exchange money in the new economy that is being birthed now, even as Donald Trump appears to be a viable presidential candidate. Get the inside scoop and be one of the first to leverage the magick available here.

Hasn’t the Patriarchy kept us in the dark—fighting each other for scraps in what has been sold to us as a zero-sum-game—long enough? (This isn’t male-bashing: there are plenty of men who make up the 99%.) It is more than time to level the playing field. And not with pitchforks or mudslinging, but simply by getting clear on the TRUTH.

When you untie the myth of Midas by merely slicing through that Gordian Knot of untruths about power, money, influence, and even your own divinity, you’ll laugh at how simple it has been all along.

Come, darling—come take your place in the temple of transformation around money, power, and owning your gifts. Your throne and your crown are waiting.